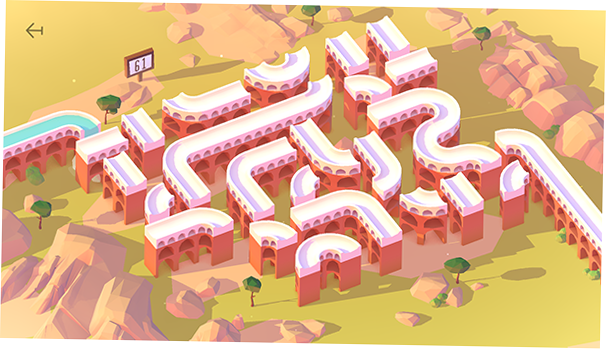 Take for instance some of the later levels, when you can’t really  help but be proud of yourself when you finally figure out how to beat a level. A lot of the times will be only just barely enough room to get your pipes through and you wonder- is this the only solution of this level? Sometimes you might actually be right. The amount of spatial thinking in this game is pretty important. Space is an important element when thinking about how to beat each level.

The sort of sketchy hand-drawn look the game uses for its art style is actually pretty cool. It’s very unique I feel like I haven’t seen it in puzzle games. The music is very unobtrusive. I like the fact that there is no scoring and also no time limit for each level- you just have to beat each level given whatever you are given at the beginning. There’s a game called Block that’s a lot like it. I recommend checking that one out as well. A lot of people might complain because this one is missing high scores and it’s missing social network integration but I kinda like the game just how it is.

The hardest part of the game is the fact that you really can’t move on to try other levels until you beat the one that you’re actually stuck on. You can’t just circumvent it, go around and try a different level, then go back to it; you have to be the level that your on before you can move on at all. That’s kind of just part of the character of the game itself- it doesn’t let you get away, it doesn’t let you escape, and it forces you to get better and beat the level that you are on.

So all in all, this game is a good combo of different game mechanics that actually has a pretty good art style and is a lot of fun to play- I recommend checking it out completely.  Another great bridge builder is Bridge Constructor Portal so check that one out too, it is by the same people that made Portal and Half Life.

For a great free tower defense game check out Jamata Turret Defense on the APP store.