If you have been in the App Store in the last ten years you have probably seen more than one Assassin’s Creed game there for download.  There are so many different versions of the IP out on the App Store.  They have card games, multiplayer games, and even a pirate game based on Black Flag.  It’s hard to find another company besides Ubisoft that has flooded the mobile market with so many versions of the same basic game, especially one that originally was a console title.
The new Identity game focuses on the Italian Renaissance, which is a favorite among fans.  You ahve to solve the Mystery of the Crows by following a series of missions.  The plot of the game is actually told through text in the mission descriptions instead of the usual gameplay-infused narrative.  So, unfortunately the gameplay kind’ve suffers a little bit from that thinning out of the material. 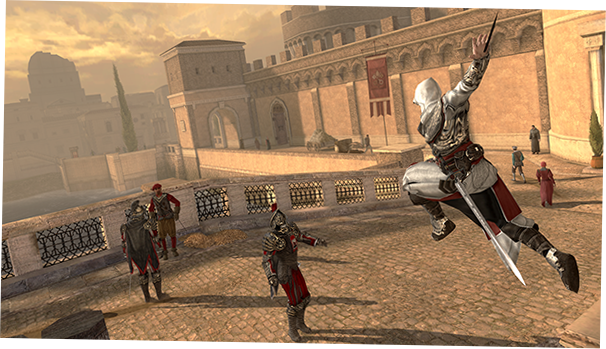 The controls are also very thinned-out.  If you approach a building you will scale it automatically.   If you kill someone, you will probably escape without even raising an alarm most of the time.  Even if you get caught it only takes a tap or two and you can kill the witness or escape to the roof for ten seconds ’til the heat dies down.
That being said, the arenas that you act in are also a lot smaller.  The missions aren’t really as interesting as they should be.  There’s a lack of exporation and freedom that have come to define Assassin’s Creed.  Maybe it’s unavoidable, since this is a mobile game.

Unfortunately missions are tied to XP, so get ready to grind as well.  You might find yourself opening up old missions just to get enough XP to move onto the next level.  Yes, you heard that right.  Old school grinding. Yay.
The only other option is to do “contracts” that are usually a single kill or task and are easily and quickly done.  Again, not too terribly exciting.
At least the game looks good? Anyone who says that mobile games all look like crap should take a  look at this game, that is for sure.  You will start to think you are on an old ps3, that’s how good the visuals actually are.
Not only does the game have a premium price tag, but there is ingame currency as well.  And you NEED this ingame currency in order to forge new equipment.  That’s right! You NEED it.  You can’t just get the items you need to construct it.  You also NEED the ingame currency if you hwant to have a second assassin.  Again, yay.
That, combined with skill points, means that there are actually MULTIPLE currencies in this game to keep track of.
Running into a brick wall while you are playing stating that you ‘don’t have enough money’ to proceed is a huge slap in the face for a game that YOU ALREADY PAID FOR!
I don’t know who thought this was a good idea, but it takes a relatively good game and really puts the noose around its neck.