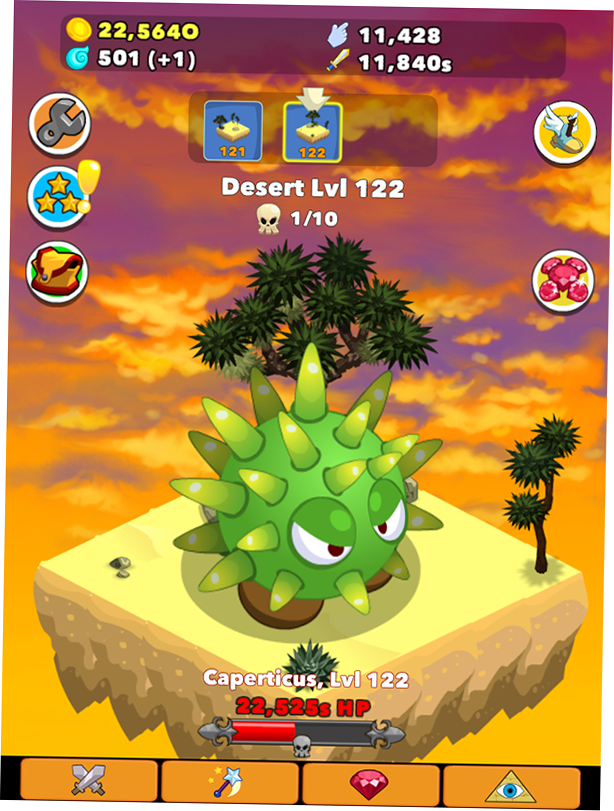 Gotta tap that all day tap as fast as you can and Boom! The monsters are gone. You get coins, immediate reward- Boom! I mean adrenaline, endorphins; just escaping your brain, just flowing through your head- underneath your scalp. Maybe coming out your hair? It’s nuts.

You can use those coins to upgrade. You can level up your character, you can buy more heroes too using that stuff. You gotta collect jewels too.  Gotta collect jewels, dawg. What good are coins with no jewels hello?

Jewels allow you to power up. Gotta power up. I mean, you can click as fast as you want, you can hit the screen and you can tap taptap all day but you need to up your skills and the only way to do that is to use jewels to power up. You need to ramp up your skills.  Each one your finger taps does more damage that way. Monsters hate that stuff. At the end of each level you got the good old boss fight. It’s much more difficult than usual and you have a limited amount of time but man it’s fun.

Like I said earlier, this android game is addictive.

There are no tutorials, nothing like that, you just jump in. There’s no splash screen, no intro- you just gotta jump in and figure it out. It’s addictive, it’s heated, it’s hot. I mean …. it’s rapid and it’ll hold your attention, it will be hot and heavy for a while but then after that the thrill will wear off.

The only thing this game really needs is to expand a little bit as you play it instead of just being on the same platform every time.

I like how quick the setup was, liked the graphics, liked how it was addictive- at least for a while it was. It got a little redundant and basically you don’t have a lot of room to maneuver and move through the game, you’re just kind of stuck and it’s pretty simple and predictable but other than that a lot of fun to play. So I recommend giving it a shot in a see if you like it.