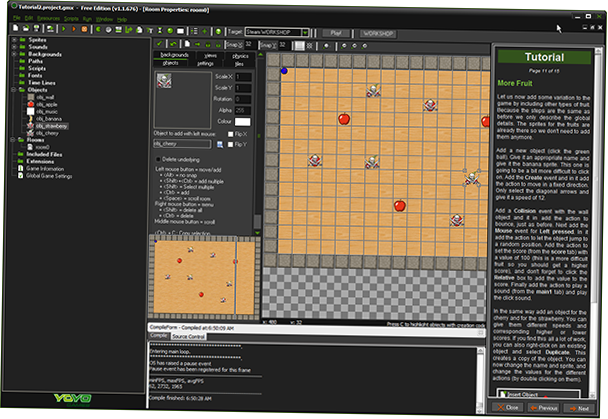 These are tools that might need a little bit of experience coding. If you have at least a little bit of coding experience it will go a long way towards using these tools. You might have already made a game or two, but you may not feel confident enough to make a game “professionally” yet.

Game maker has been around for a while now. It’s been in the humble bundle a few times as well. They really should serve as a testament to how good the game making tool really it’s. It’s actually been out since 1999, and it’s been used to create some hits that are actually kind of noteworthy, the Hotline Miami and Spelunky. It uses the language of GML, and the whole idea behind its game design is creating a library of events that trigger in-game actions. This only supports android 2.3 and newer, so if you want to make anything for devices that are older than that then no luck. It can actually be somewhat complex to use so it’s best for developers that are leased on a sophomore-junior level.

Overall, this game creating tool is really easy to use with a little bit of experience. And there is a pretty big support base if you want to have some help along the way. This is mostly a tool for making 2-D games, although there is some 3-D support. The GML language itself is actually kind of clunky so may take some getting used to, and you may never get used to it completely. Some games that come out using this recently have been Tiamat X, Savant, and Default Dan. It’s just $100 for the basic plan, and it’s a one time fee. The free version is just a trial. 🙁

Mobs vs Herobrine is a physics based game made using Game Maker Studio. Currently it is also being ported to Unity for expanded features.

Game builder is a multilayer studio that uses an interface of dragging and dropping, just like Windows file explorer. You can build games using their multilayered editor in this fashion. Is also has the ability for more experienced developers to add their own personal code to the project. That can actually be a really great expansion right there. If you’ve ever heard of Spine Pro, you know that it’s a great tool for making animated characters via procedural bone manipulation. It allows you to create animations and has been recently integrated in the game builder studio. Just like game maker studio, it’s only a hundred dollars one time. However, if you will have multiplayer games you need to bump that up to $200 a year.

The company site itself features a large asset store. It has recently been relaunched so there’s a certain level polish that there that wasn’t there before. There is a free version too, if you just want to try that. The only real cons of this is the fact that multiplayer support only comes when you pay $200 a year instead of that single $100 payment. All in all, the free version might be worth checking out first.